The rhubarb sculpture was carved in locally grown oak by Handspring Design of Sheffield to mark the start of the Sustrans cycle route 69 to Horbury Junction, which opened in 2005.  It was created  from steel and oak and stands 3.6 metres tall. The artwork for the giant rhubarb came from two primary schools in Thornes and two in Horbury and their designs were developed by Graham Ritchie, of the Sheffield-based design company Re-animate. The second photo shows the rhubarb sculptures at the junction of Southfield Lane and Daw Lane on the Horbury bypass, with the rhubarb in its early stages of growth. 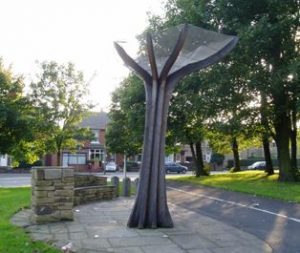 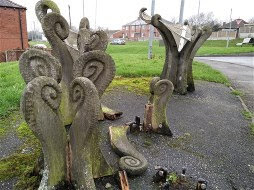