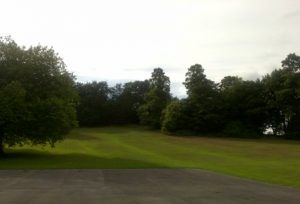 Lowe Hill in Clarence Park is the site of a motte and bailey castle probably constructed around 1150. It has extensive areas of ridge and furrow on the slopes of the hill which are clearly visible. In 1953 excavations were carried out on the hill and medieval pottery was found. At the present, the Friends of CHaT Parks are applying for funding to carry out archaeological investigations on Lowe Hill.
A local name for Lowe Hill is “Cannonball Hill” and in the 1850s a brass cannon did indeed stand at the top of Lowe Hill. This cannon had been seized from the Russians at the fall of Sebastapol and was actually fired in 1858 whilst Queen Victoria was travelling by train through Wakefield on her way to the opening of Leeds Town Hall. The cannon was apparently taken for scrap metal during World War II. The original 19th century bandstand stood at the top of the hill but was replaced by the current bandstand in 1926.