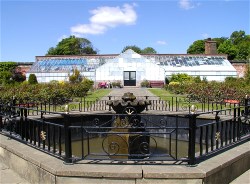 Inside the Rose Garden belonging to Thornes House is a large glass conservatory which featured an array of plants, separated into three climactic zones – tropical, temperate and desert. The fifty year old building was closed in 2012 with structural problems but the Friends of Clarence, Holmfield and Thornes Parks (CHaT) group  received a grant from Waste Recycling Environmental (WREN) to restore the building and work began in late 2014. The Conservatory is currently open during weekdays.