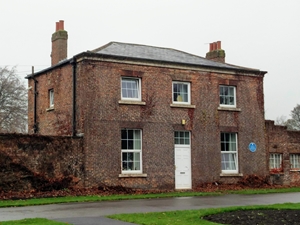 The ‘Gardener’s House’ also probably dates to the late 18th century. It is situated towards the south-west corner of the park, adjacent to the former kitchen gardens of Thornes House and is said to have been the home farm house. It is constructed of red brick with a grey slate roof. A small extension to the right (north) is single storey with two windows and a lean-to roof. A high brick wall runs north from the house to form the west side of the rose garden and enclosed greenhouse area (former walled gardens). John Wilson, the head gardener to the Gaskell family of Thornes House, lived in the  Gardener’s House with his family in 1913. At that time, there was a pig sty, goathouse and stable behind the house. In 2020, a blue plaque to commemorate Lady Catherine Milnes Gaskell (1836-1935) was placed on the wall of the house.